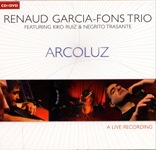 French bass virtuoso Renaud Garcia-Fons has grown into a living legend, both for his breathtaking technique and intonation as well as his talent as a composer. A dazzling performer on five strings, he uses his instrument's entire range, thus dominating the music and making the bowed double bass sound rather like a cello or a violin. When listening to his percussive speed pizzicato or his sweeping arco flageolets, the breadth of his capabilities becomes evident immediately. As a composer Garcia-Fons likes to take the listener on a gypsy's journey through the Mediterranean area, especially Andalusia, then Brittany, Latin America, India, the Arab world and even into European classical music of the past. Although incorporating influences from far and wide, his compositions are always focussed and efficient and keep to the spirit of charming chamber music. As Nils Jacobson wrote about Garcia-Fons' last album, "Entremundo": "Each piece contains its own detailed narrative. Elements of the music might seem familiar, but just palpably so, and never in an obvious way. Just let the music ebb and flow, carrying echoes of places distant and not so far away. A beautiful experience."
"ArcoLuz", the first live album after six studio recordings on ENJA, powerfully captures the fire and emotionality of Renaud Garcia-Fons' vibrant concert performance. With the core trio of "Entremundo" -- including upcoming flamenco star-stringer "Kiko" Ruiz and drummer "Negrito" Trasante of Gipsy Kings-fame --, Garcia-Fons delivers seven of his thrilling Spanish-influenced pieces, four of them being brand new. His trio's highly inspired, forceful and expressive performance, caught at Germany's Schloss Elmau in summer 2005, is not only presented on a first-class CD recording but can also be seen on a 85-minute DVD video disc directed by Nicolas Dattilesi. With subtitles in four languages and bonus tracks included, the DVD is further proof for Renaud Garcia-Fons' and his trio's extraordinary musicianship and deep-felt emotions. "He's in a position to unite nations of music lovers" (AllAboutJazz.com).
RENAUD GARCIA-FONS
ARCOLUZ
ORDER NO. ENJ-9478 2
Renaud Garcia-Fons 5-string double bass
Kiko Ruiz flamenco guitar
Negrito Trasante drums, percussion